On the Downwind Leg 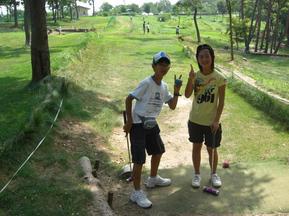 In between today’s midday BBQ and swimming, I want to get in one more email before we leave for Tokyo...

I’m pretty certain this is Friday. Where has the time gone?

This morning we went mallet golfing. It's a cross between croquet and golf. Enough said?

Threesomes of Japanese and Americans. Lots of fun. And certainly another chance to get to know our hosts... 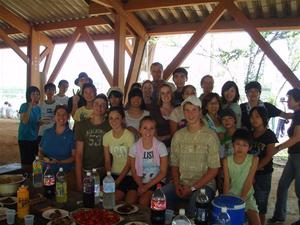 The course was up in the hills. Cicadas screamed as we played. Were they really laughing at us? I’m certain the cacophony was generated by our lack of skills.

The humidity is brutal and so different from Broomfield's arid clime. I lose 40 pounds every  morning just tying my shoes. Many of us have taken to adopt the Japanese method to fight the heat and humidity—wearing water-soaked cloths around our necks. It does help—but the humidity always wins regardless.   Our hosts hosted a BBQ for us at the athletic park. A high school tennis tournament was underway. And we ate alongside a practice sumo ring.

A professional sumo team works out here in Ueda. I saw three of the wrestlers walking down the street the other day. Vans with flashing lights and signs warning "wide load" preceded and followed the troupe. Okay, not really, but the wrestlers did block the sun as they walked down the street, so they sure ain’t hard to miss. They were nowhere to been seen this afternoon. I suspect they were getting a shiatsu massage in an air-conditioned training facility. 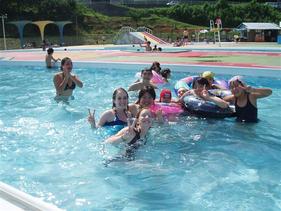 Our group is headed for the pool this afternoon. And a perfect day it is to swim.


Time with our hosts
My host family takes me to the hot springs—and the springs are plentiful in this region—every night. It’s a great way to end the day. After splashing down, we head into a sauna heated to about 95 degrees CELSIUS. It's hot enough to melt my fillings. Five minutes or so of that, and we head to a cold pool (27 degrees Celsius) or a hot pool (41 degrees). There we soak for a while. After we're parboiled, we head into the shower area, soap up, hose down and head back out for more soaking. Tough job, but someone has to do it.

Yesterday we visited a terrific Buddhist temple. I could try to describe it, but you'll just have to see the pictures—and even they won't do it justice. Stunning. Peaceful. Ancient. Mystical.

In the afternoon we headed to a Ninja house. Lots of fun trying to find the secret passageways—and I lost probably another 110 pounds due to humidity. I was disappointed that I never did see a Ninja, but stealth is their job, eh?

Tomorrow we spend individual time with our host families. I'm headed to another hot springs high in the mountains. And tonight I'm cooking them up an American BBQ 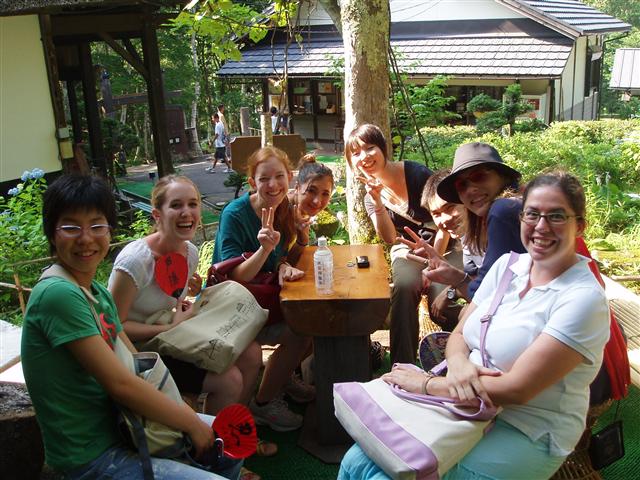